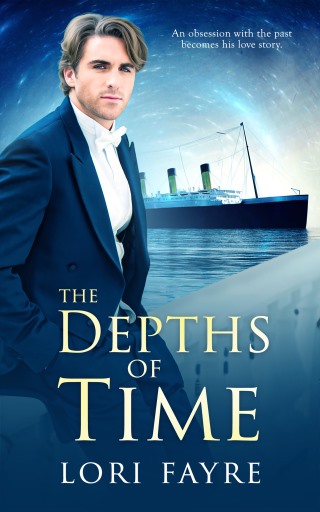 The Depths of Time

An obsession with the past becomes his love story.

Obsessed with RMS Titanic from a young age, Lucas Thompson has spent his life studying the shipwreck and turning his passion into a career in marine archeology. But, on the one-hundred-year anniversary of the voyage, he's drawn to the ship's resting place by a strange sonar ripple that hurtles him back in time. Luke wakes in the year 1912 as a passenger on the grandest ship in the world.

It's there that he meets Quinton Hawthorne, the man who sacrificed himself to save passengers during the sinking, including Luke's great-grandmother. He also comes face-to-face with Lucinda Hughes, the very woman who raised him on her stories of the ship. With his inside knowledge of the impending disaster, Luke feels a responsibility to change history and develops a plan to save the doomed ship and its passengers.

Things quickly fall apart as Luke begins to fall for Quinton, knowing that it can only end in heartbreak. Though he's determined to save Quinton, he's also faced with a dilemma. Should he save the ship or allow destiny to play out?

Lori Fayre: Lori Fayre was born and raised in a small South Georgia town. Her debut novel, “The Devil's Maverick”, was a novel nearly six years in the making. An obsessive consumer of romance, Lori knew it was the only genre for her. When she's not writing, she enjoys reading, drawing, or binging Hulu with her husband and Yorkie.